Irons in the Fire: Chronicles of Talis Book 1 by Antonio Urias 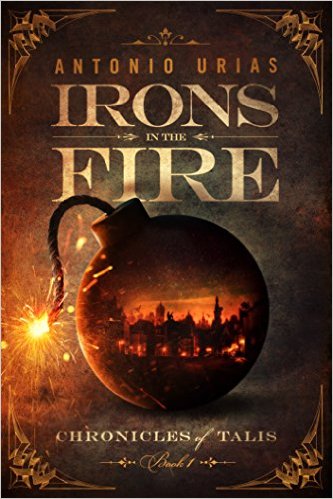 Irons in the Fire by Antonio Urias is a story about a city in turmoil. Faeires exist, and they’re flooding Talis, a Victorian-esque city. Relations between the fey and humans have never been good, but finally come to a head when a bomb is set off, killing humans and fey alike. A rebellious group of fey is working behind the scenes to bring down the Duke of Talis and bring change to the city, but will it be enough to change the status quo?

For me, the strongest point of this novel was the writing. The author has a large vocabulary, and their writing style is easy to get lost in. The descriptions are vivid, and I could visualize everything going on as the story unfolded.

My problem, is I have a hard time condensing this plot into a concise synopsis because there are so many interesting characters with their own plots and subplots, that I feel a vague description doesn’t do this book justice. And while the characters were interesting and fleshed out, I feel like none of them really completed what they set out to do, like this was just the first act in a long play. The book ends, not in a cliffhanger per se, but the action is just starting and quests are only beginning to get interesting.

The other issue I had was the multitude of characters. Almost every character we meet more than once has a subplot of its own.The author jumps around from perspective to perspective quite often, which I found jarring.

This series will probably get a lot more interesting in a book or two, and the writing is good enough that I might have to stick it out and see what finally happens.

Interested in Irons in the Fire? Buy it on Amazon for only $3.99.