Ghost of a Chance by EJ Devitt 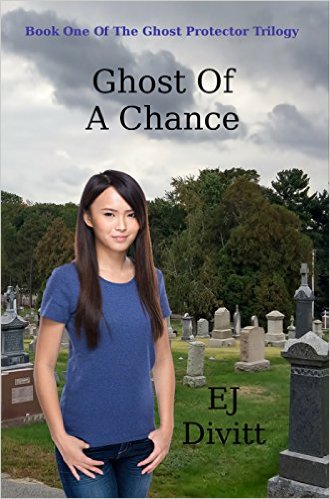 Ghost of a Chance follows Jenny Chang, a grieving young woman dealing with her father’s death while trying to maintain a sense of normalcy by helping her mother take care of her little brother, working at a book store, and hanging out with her friend. Normalcy flies out the window when Jenny starts having vivid dreams of her father, who talks to her. These aren’t memories, but vivid, current conversations. Jenny learns she is a Protector, a role that her family has mostly fulfilled for generations. Jenny has to learn how to control her powers, help ghosts, and find the spirit responsible for her father’s death.

The premise is fairly interesting and I was excited to pick this book up. And while the author gave a lot of thought to her ghosts and the Protector role, I found the overall execution to be lacking.

I found Jenny’s personal life had more twists to it than the actual plot of the book. A lot happens to her, most of it bad, but the whole Protector plot line was fairly straightforward and struck one of my pet peeves. Despite being almost completely untrained and losing everything because of the role, Jenny seems to do everything right as a Protector, which seems fairly implausible.

And despite being marketed as a NA book, Jenny and her friend and their thoughts and actions came across as juvenile. Had her age not been stated, I would have assumed she was around sixteen, not eighteen. I also don’t think the writing is appealing to NA readers. It’s rather basic and almost all telling. It just doesn’t meet the maturity level of the readers this book is marketed to.

As for spelling and grammar, this book could use a proofreader and a little more polish. I just wasn’t thrilled with it. I did enjoy the diverse main character, but her culture and traditions never came through, which I think was a missed opportunity.

This book is available on Amazon for only $2.99 or free for Kindle Unlimited subscribers.

Let me hear your thoughts. We’re always on Facebook and Twitter and love to hear from you.