The Heirs of Lydin by Aidan Hennessy 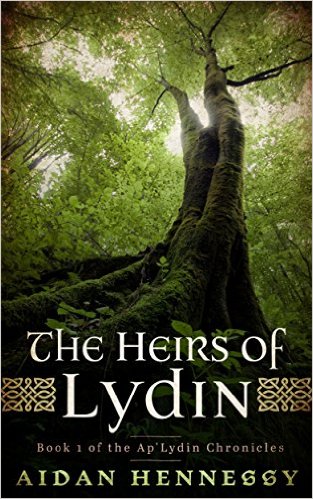 The Heirs of Lydin by Aidan Hennessy follows three members of the Ap’Lydin clan: William, Polnygar, and Bellaydin. Bellaydin and Polnygar are step-siblings and outcasts, half-humans living among intolerant elves. William is a human Earl who extends an invitation to his cousins to come visit. That all changes when Polnygar stows away on a ship and Bellaydin is accused of murder. On the run and far away from home, the two step-siblings are living very different lives. Bellaydin is on his way to see William, and Polnygar… well, she has quite an adventure of her own. The three things these cousins have in common is that a religious group is continually trying to murder them. William and his relations before him have fought and killed these fanatics for years, but a war is coming that no one is prepared for.

So sword and sorcery books usually aren’t my genre of choice. I find the endless history, backstories, character point of view changes (glares at GRRM), and genealogies bog the story down. While The Heirs of Lydin did contain all of the above, it was in short bursts, and there was plenty of action in between that I didn’t mind as much. There were a few characters I wasn’t fond of hearing from but they didn’t give their perspective very often. I do wish we heard from Polnygar more. While I liked Bellaydin and think he did develop a lot, this felt more like “his” story than anyone else, and I think that Polnygar has more exciting adventures to tell us about. Now, the story isn’t finished, so I’ll have to pick up book two and see where she travels next and how these characters come together.

As for the bad guys. I was a bit concerned at first, when it appeared the author was basing the bad guys off Middle Eastern religion as so many of these fantasy novels seem to do, but now I’m not so certain that was his intent. There were just certain phrases that gave that impression. However, the author does put a fun twist on things, dressing his bad guys (or are they?) in kilts and having them speak something that resembles Gaelic. I think that and the kilts has me holding onto hope that they’re not really bad.

I thought the writing, especially for a debut novel, to be fairly good. There were a few typos and some sentences that stated the obvious, especially when the author was trying to pass some time, but overall, I found the story very engaging and the story lines managed well.

Interested in this book? You can get it on Amazon for only $2.99.

2 thoughts on “The Heirs of Lydin by Aidan Hennessy”