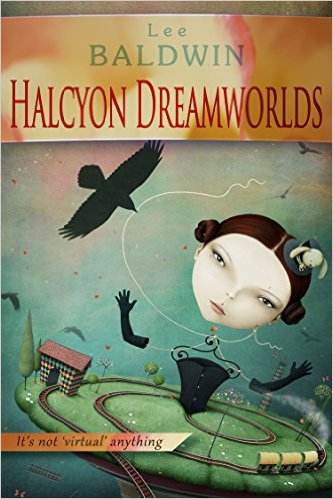 Halcyon Dreamworlds by Lee Baldwin follows Logan Fischer, a 41 year old woman that doesn’t lead a very exceptional life, except for at night, when she logs onto a cyber-reality game and gets to be a better, younger, freer version of herself. With every visit to the Dreamworlds, Logan’s avatar, Yuri, becomes more real, the life she leads online much more interesting than the one in the real world. When a chance encounter with a beautiful stranger leads to Yuri becoming the obsession of the Dreamworld’s creator and people turning up dead, Yuri and Logan do their own digging, relying on friends and enemies to figure out what’s going on, and why Yuri and Logan have become the center of it, especially when Logan’s body goes missing.

This was an interesting novel. In an age where social media is a constant in our waking moments, this almost dystopian-like world with a failed economy and huge gap between the wealthy elite and the rest of us is pretty plausible. So I can understand the allure of the Dreamworlds. Lee Baldwin did a great job with world-building both worlds. They’re both vibrant. Dreamworlds especially comes to life, and this is where Lee Baldwin’s computer programming skills shine. The plot was also intricate and kept me coming back.

The problem I had with the plot actually had nothing to do with the plot at all, but the fact that this was written in third person omniscient, present tense. Because the book was written in third omniscient, we know every thought and motivation of every single character. Had the author written in third limited, and switched point of view every chapter or so, it would have built suspense and made the mystery that much more thrilling. Also, the third omniscient and the huge cast of characters made keeping track of everyone and their avatar quite the job.

Another issue was the writing. There were word choices and spellings I couldn’t get around like characters calling each other honi (honey) or saying wo (whoa). And because the novel was in third present, a style I hadn’t encountered before, we were told everything instead of shown, which took away from the author’s storytelling. A different tense choice would have done great things for this book.

Interested in Halcyon’s Dreamworld? You can get it on Amazon free for Kindle Unlimited users, or buy it for $1.99