The Lighthouse Thief by Bo Burnette 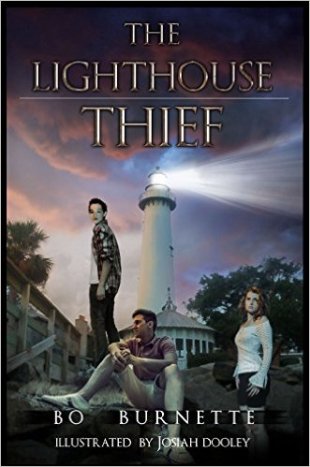 The Lighthouse Thief by Bo Burnette is a Middle Grade Mystery set on the island of Saint Simons. When his parents go on vacation, Ethan is forced to play host to his cousin, Connor. Ethan tries to prove to Connor the many ways in which Saint Simons is amazing, but in the process, Ethan stumbles upon a plot to vandalize the beloved St. Simons Lighthouse. With the help of Connor, Ethan must stop the vandals before it’s too late.

I’ll be honest; I had quite a few problems with this novel.

The technical writing of it was a high point with only one or two minor errors I was able to pick up on. That said, there were some bad formatting issues when it came to pictures involved. They were impossible to see on my Kindle and so I had to open up the app on my computer to view them. Normally, that wouldn’t be too much of a hindrance, but there are information and dialogue in these pictures (some in the form of texts) that are not in the actual text and which you need for clarity.

I will also take time to say that the descriptions of the place were very vivid and it was obvious the author, Bo Burnette, took a lot of time to paint a picture of the setting and make sure to include some of the history of Saint Simons. Unfortunately, this was written in first person from the perspective of a 14-year-old boy. The language used just didn’t fit and it created a disconnect between the story and me as a reader. I might have suggested moving this to third person perspective if Burnette wished to keep some of the more elevated word choices (which I am all for including in middle grade novels).

The dialogue was similar to the writing in that it didn’t really fit with the characters. Word choice and  syntax for the dialogue left a lot of it feeling stilted and a little formal where it should have been more natural with flow. Most of it didn’t read like actual conversations you would hear (especially between two 14-year-olds) and even the adults read as just a little off. This made it really hard to connect with the characters and why I didn’t really get a clear feel for them. Then there is Cassidy, Ethan’s other cousin, who didn’t play any significant role. Her one part could have easily been handed over to another character with no effect to the actual story.

As for the plot and mystery… those two areas are where I had the biggest problems. The initial plot device of getting Connor to the island didn’t make much sense to me. Ethan’s parents force him to invite Connor down to the Island and stay for the week. Despite Ethan not wanting Connor to come, the conversation involves Ethan mainly trying to convince his cousin to come stay and giving him tons of reasons why he should that he then must prove or Connor will never come to visit again… This is where I got lost. If Ethan doesn’t want to have Connor down and Connor doesn’t want to go, why come up with reasons at all? And what’s the motivation behind proving them right (seeing how Ethan doesn’t come off as the sort to do something just to prove he’s right)?

The mystery also starts off on an odd note. Ethan, upon seeing two men talking, immediately sneaks over to listen to their conversation. He doesn’t have an apparent reason for this (doesn’t think that they look suspicious), he just decides he desperately wants to know what they’re talking about. The things discussed by the men don’t sound suspicious at all, so perhaps it was the tone of their voice that made Ethan think they were up to no good. Unfortunately, that isn’t made clear.

There were also a few plotholes. Not sure I can get into them without including spoilers, so I will briefly mention that there is a list that has no times or dates (which is important when tracking down people and their activities), a phone that broke but appeared to be fine a few pages later, an overheard conversation which (according to the initial scene) wasn’t overheard, and a few others.

Due to the plotholes and disconnect with the characters, I couldn’t really get into the story. I appreciated the descriptions and attention to grammar/spelling, but there were some formatting issues which also detracted from the reading experience. Overall, the writing itself was sound, but I thought most other areas could have done with some more thought to add consistency and coherence.

If you found this review interesting, click here to get the book for free!