The Almshouse by Blanche King 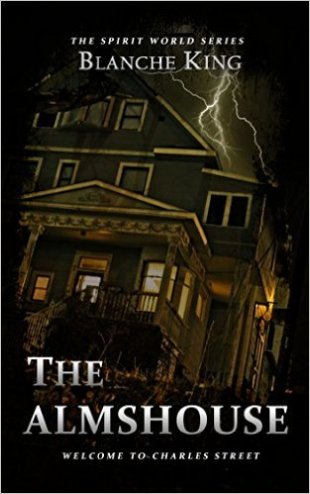 The Almshouse by Blanche King is a mystery novel featuring a very ghostly cast of characters. After a bag of bones falls on her and a fire consumes her boarding school, twelve year old Julia finds herself drawn into the spirit world and the mystery of another fire that had burned down the Almshouse (previously located where her boarding school now stood) and its tenants.

I really enjoyed this novel.

I’ll mention first that there were some issues with the writing. Most of the time it was engaging and easy to read, but there were also a lot of instances where the wrong tense or the wrong form of a word was used. Normally, that would completely put me off of a book, but the story made up for it.

The opening chapter was fantastic. Completely pulled me in and not at all what I was expecting. From that point on, the plot took a different direction, but that’s what I loved about it. It was a mystery and while I could pick out the important pieces, there was enough doubt there that I was left with multiple guesses until near the end. As an avid mystery reader who generally tends to guess it all (correctly) before 25% is through, this was such a nice change. I will say I got the general ‘who dunnit’ within the first few chapters, but the rest didn’t fall in to place until closer to the end despite the clues thrown out there.

The overall plot was, I thought, very well thought out. There was a lot more going on than just the mystery, and while I could have used maybe a bit of a clearer idea on just what ghosts were and were not capable of, I thought everything came together nicely. The pacing was also done well. Though the novel takes place over quite a few years (10 I believe),

The characters were well rounded and had depth to them. Julia in particular seemed very real to me in her thoughts and reactions. She wasn’t perfect, but she was still likable. And then there is sweet and naive Lyle and Julia’s half-sister, Melinda. I enjoyed seeing the characters grow and change over the course of the book and liked how I never questioned anyone’s actions because it was either well explained or something that you could really see someone, especially these characters, doing.

Despite the errors, I really enjoyed reading this book (which is shocking for me to say). I would suggest the author get an editor to fix up the tense issues, but the novel was still a great read and I would definitely recommend picking it up if ghosts and mysteries are your thing. According to the Amazon page, this is book one in a planned series, and I look forward to reading the second.

If you found this review interesting, click here to get the book for $1.38 CAD or free on Kindle Unlimited.