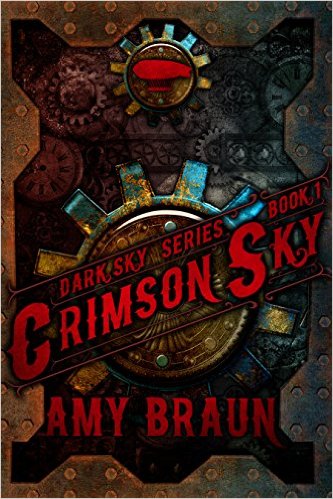 Warning: scenes of torture and violence

Amy Braun introduces us to a terrifying dystopian world with her book Crimson Sky. For ten years, after the sky first shattered and the Hellions emerged, humans have become the hunted, forced to live underground the majority of the time. Every time they surface to scavenge for supplies, the survivors risk attracting the attention of the Hellions, whose battleship floats over the city of Westraven.

Claire is one of the survivors, an eighteen-year-old engineer that can fix almost anything. She’s stuck in one of the underground colonies, working for an abusive war lord. Terrorized and starving, Claire puts up with the relative safety for one reason: her eight-year-old sister, Abby. Living with Garnet’s group is much safer than trying to go it alone. But when Abby is taken by the Hellions when they’re out scavenging and Claire is left for dead, all bets are off. She joins a band of marauders and promises to fix their ship if they get her on the Hellion’s ship and help her destroy it.

The author creates a truly desolate world. It’s dark, grim, and horrific, with people forced to do pretty unspeakable things just to survive. That being said, I really enjoyed this book. The worldbuilding is fantastic, and the characters are interesting and fleshed out. Claire was tough, determined, and smart, even if she had no fighting skills to speak of and was facing monsters straight out of a nightmare, she was determined to save her sister. The rest of the characters were also well-developed, though I want to know a lot more back story on all of them. I think that’s going to pop up in the next book (I hope!).

I’m not a fan of love triangles, but this one was introduced at the end of the book, so it wasn’t that big of a deal to me. Claire could pick either of the men and I’d be happy with the choice, since I liked both of them.

This book is well-plotted if a bit predictable, and has a fast pace that kept me reading. There are a few twists that I didn’t see coming, and we’ve been set up nicely for the second book in the series.

Like this book? You can buy it for $2.99 on Amazon, which is a great deal for this book.