Secrets of the Throne by C.C. Rogers 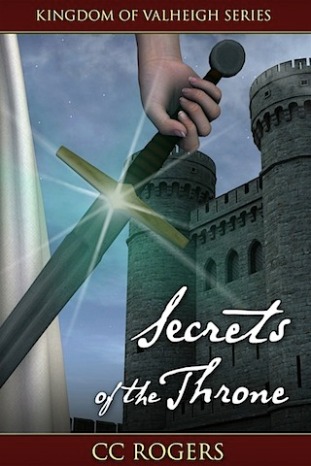 Secrets of the Throne by C.C. Rogers is a light fantasy novel that follows Lady Sharilyn Dawson as she marries her late cousin’s husband, Lord Jonathan Redley, in order to care for him and his son. Swept into a world of court politics, spies, and assassination attempts, Sharilyn must help her husband to save the King and the Kingdom, all while experiencing the roller-coaster ride that is falling in love.

This one is a little higher on the price scale, but I found it to be a highly entertaining read.

I liked the writing. There were hardly any errors and the overall style seemed to fit the novel; however, there were some issues with the dialogue as the occasional modern phrase popped up and took away from the more ‘medieval’ feel. I couldn’t quite decide where the author was going with the dialect, which could sometimes pull me out of the story.

As for the other aspects, I was split on them. On one hand, I really loved reading this book and found it an entertaining read. On the other hand, I recognize that there were problem areas that could have been fixed to make the book even better.

The characters were one thing that I loved, but at the same time know had some issues. I really loved them and the fact that most of them were sensible, undramatic, actually talked things out, and didn’t make me want to tear my hair out. The main character, Sharilyn Dawson, was a refreshing change from the usual swooning female leads and Jonathan Redley was the complete opposite of all of the domineering, controlling male leads that are found in the majority of novels today. Not that those kinds of MMC are bad (well, they can be, but that can be said for any character…), it’s just nice to change it up now and then. The relationship they had developed at a good pace and was realistic in that they married quickly for convenience, but avoided insta-love and allowed their feelings to grow over time.

That said, the majority of the characters were very one dimensional, black and white, which wasn’t too realistic, especially for something involving court politics and secret plots against the King. The lack of grey areas took away an entire level of depth from the novel, leading to it being an entertaining but ultimately very light read. I also had issue with the amount of men crying, though that could be seen as an interesting comment on gender and how ridiculous it is to have characters crying all the time (usually female, in this type of book). It was a little too overdone and had me rolling my eyes more than once.

The plot itself was good, though at time a little predictable. It was very light and could have been pushed further if the characters had been a little more rounded. The world building could have also been a little better done as some aspects, I felt, were introduced a tad too late, especially seeing as they ended up being pretty important to the overall plot.

I’ll finish off by saying that this was a light, quick read that I found to be highly entertaining, despite the areas that could have used work.

If you found this review interesting, click here to get the book for $4.52 US.