Once Upon a Scandal by Julie LeMense 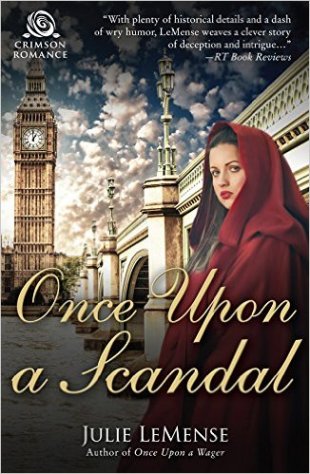 Warning: Contains some swoon-worthy scenes with a dashing rake.

Once Upon a Scandal by Julie LeMense, is the story of Lady Jane Fitzsimmons, the ideal Society lady. Prim and proper, she’s caught up in a devastating scandal when her father is found murdered outside a disreputable gambling hall. Disgraced and soon to be homeless, as her cousin, Gerard, inherits the family home and title, She does have one other option: become the mistress of the odius Sir Aldus. Until Lord Benjamin Marworth, Society’s golden boy and spy for the Crown, hatches a sensational plan: Lady Jane must die, and her French cousin comes to town to lure out Lord Fitzsimmons killer. Of course, Jane, who has nothing to lose, agrees, and is quickly involved in flirtations and plots to win the war. As well as an attraction to Lord Marworth. Will she find the killer before they find her? Will she find love and a second chance as well?

Overall, I found this book entertaining. I love regency romances, and this was one of the better ones I’ve read in a while. Jane goes through a lot of growth, and I much prefer her character once she’s stopped acting so uppity, to the Jane in the beginning of the book. I also liked the heat between Jane and Marworth, though true to the genre, he was her first kiss and suddenly he’s the one. There was actually another lord I wanted her to end up with, just to switch things up. Though Benjamin and Jane’s attraction and relationship grows fairly normally, I found Benjamin’s misplaced guilt (the major roadblock to their happiness), especially to spite his father by telling Jane he’d never marry, a little hard to be sympathetic to him at times, especially when he was toying with Jane.

As for the actual mystery, I had a couple suspects, though some of the twists and motives threw me, which is always nice. This book is well-plotted and kept me turning pages. I had quite a few swoon-worthy moments in between laughing at character banter, so well done!

Now, I didn’t realize that this book was the second in a series, but the characters from the first book are tertiary and only mentioned a few times, so there aren’t any spoilers. This book is fine read as a standalone. I will be going back and buying the first book as well.

Interested in buying this book? It’s free for Kindle Unlimited subscribers, or $3.67 to buy on Amazon.