Stowaway: Curse of the Red Pearl by Tracy Fobes 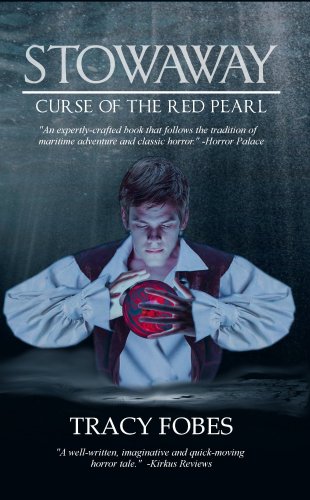 Stowaway: Curse of the Red Pearl by Tracy Fobes is a high seas horror that takes place during the 1800’s. Kit, due to family duty and a bad leg, is forced to work as a book keeper for his father’s very successful shipping company even though all Kit really wants to do is have adventures on the sea like his Uncle. When his Uncle returns from his most recent trip with a peculiar treasure, a red pearl, Kit notices that his Uncle seems to be deteriorating both mentally and physically. Convinced the pearl is to blame for his Uncle’s condition, Kit is determined to separate his Uncle from the pearl, even if it means becoming a stowaway.

I was really excited to get the chance to read this novel as I love anything set on a ship and I’ve looking to get into a good horror. Unfortunately, while this story has potential to be a great read, there were some huge problems when it came to execution.

I’ll start off by talking about the things I did like. It was fairly well paced, setting things up and giving you time to get to know the characters so that you could feel more connected to what was happening to them and, with that, be more horrified by the events. The general plot itself was easy enough to follow and interesting. Possession is done a lot in horror, but this novel tackles it in a way that doesn’t feel completely overdone.

The characters are also thought out well and I enjoyed the fact that the main character, Kit, wasn’t perfect and had obvious flaws. Kit’s Uncle is another character that you get to know well, even though he’s not really himself for a lot of the novel. I felt some of the secondary characters could have done with a little more developing since they become important down the road, but other than that I felt like they were all relatively well done. Dialogue also flowed fairly well and seemed to fit with the setting of the novel.

While the dialogue was done well, one of the biggest problems I had with Stowaway was the writing. I found there were a lot of errors, both in grammar and spelling; sentences missing words and too much repetition. During the climax of the novel, the ‘suddenness’ of events was overused when trying to create tension and that sense of horror. I lost count of how many times ‘suddenly’, or it’s equivalent, was used in the last 60 or so pages. A lot of these problems could have been fixed with a good editor, or even another read through before publishing.

The second issue I had with the novel, one that was in large due to the writing, was that I just wasn’t horrified. I have read things that had me unable to sleep at night, keeping all the lights on, or even just a slight quickening of pulse. I didn’t experience any of that with this novel. The reliance on things abruptly happening and the errors took me out of the story and didn’t allow me to really feel the terror the situation should have invoked.

Overall, I wouldn’t call it a bad read, but it wasn’t as good as it could have been. It’s a fairly quick read and can be entertaining at times, but it’s in desperate need of a good edit to reach its full potential.

If you found this review interesting, click here to get the book for $1.20 CAD!