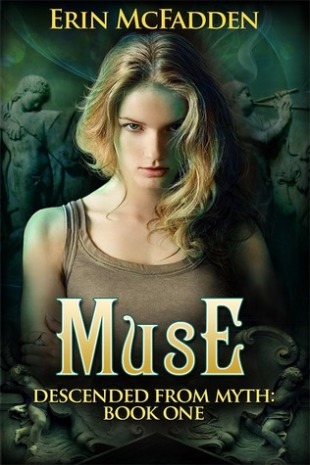 Muse by Erin McFadden is a book about nineteen year old Anna Saint-James and twenty-one year old Daniel Lyoncourt. Daniel is a Guardian, a member of a Brotherhood that has existed for thousands of years. His job? Protecting Talents, the human descendants of the original nine Muses. Anna is Daniel’s first assignment as a full fledged Guardian, and at first, he’s not too happy about it. The Talents he knows are the movie stars and entertainers of the world, and treat Guardians more like servants, and the relationship has been strained for a while. Daniel also has some personal reasons for not liking Talents, but he has no choice but to take the job.

Anna’s an undecided college student with a small group of close friends, and she feels rather inadequate. Her one friend has already penned a novel, one’s an aspiring fashion designer, and Anna has no real idea what she’s doing with her life. When Daniel shows up and tells her that she’s a Talent, it takes a bit of convincing for her to believe him. And when she finds out she has more Talent that anyone Daniel’s ever met, it attracts the attention of some rather unsavory characters.

Since the story is told in first person, with each chapter alternating from Daniel and Anna’s point of view, you get to connect with both characters. I liked Daniel immediately. He’s smart, funny, and serious about his work. He also loves his family and has a deep sense of duty to both the Guardians and his mom and little sister. And he’s adorable. He’s also blinded by lust and a bit overconfident in the beginning, but wises up as the book goes on.

Anna Saint-James is the perfect daughter, even if she is adopted. Loves her family, is a great friend and good student. I was worried that in the beginning that she was a Mary Sue character, but when things get tough, she’s resourceful enough to help fight her own battles, which was something I was worried about. I didn’t want her relying on Daniel to save her, but Anna and the girls have quite a few tricks of their own. She, out of all the characters, gets the most development, and I like how she grows throughout the book.

The writing was strong and the story had a fast paced narrative, although there were some events like when Daniel’s mom and Anna meet for the first time that get glossed over in narration and we’re told about, rather than shown, which I would have preferred. There’s quite a bit of conversations and story that gets narrated in between the important scenes that we’re told about but not shown, but it helps move the story along at a quick pace. I also got a very generic version of the Talents and Guardians, but I didn’t get a lot of their backstory, which I kinda missed. I’d loved to have learned how it all happened, and there’s some allusion to it, just no big explanation. There’s also a bit of insta-lust, but hey, who hasn’t fallen victim to that at least once in their life?

Overall though, there were a lot of sweet parts, some funny parts and some good action scenes. I can’t wait to read book two!

Muse is for sale on Amazon for only $2.99 and this is one that I recommend!