Lead Me From Temptation by Kris Calvert 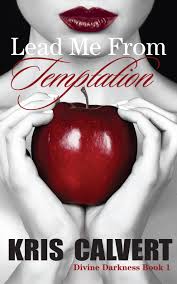 Warning: Contains one scene of sexual content, mentions suicide, some violence, and end of life care.

Before I even begin my book review, I want to direct your attention to the cover. It’s beautiful. Sexy. I love it. And it fits the book to an extent. But based on the cover, I’m not entirely sure the story I got was what the cover evoked. Not that that’s a bad thing, just an observation I wanted to point out. Also, I’m not entirely sure how to catergorize this book. Is it horror? Urban Fantasy perhaps? Romance? Spiritual/religious? This book doesn’t seem to fit into just one keyhole, which is great for a reader, but makes my life as a reviewer a bit harder. Now, on to business.

Lead Me From Temptation by Kris Calvert is the story of Indie Luce, a twenty-something hospice nurse that just so happens to see Spirit. Her grandmother calls her Divinely Marked. In her line of work, that takes the form of a deceased loved on helping a dying patient cross over. Indie is also grieving the loss of her twin, who OD’d in the home she still lives in because she can’t afford to move anywhere else. Indie, when we meet her, is broke, a little burnt out and suffering from nightmares. I have to credit the author there, the nightmares are super creepy, and throughout the book, thanks to her visits to her psychiatrist, the reader never truly knows what’s real and what’s not. I loved that about the book. But it also made the ending a bit more confusing. But I’ll get back to that.

Indie is taking care of two patients when her boss who is also her best friend, calls her in and tells her one of the wealthiest men in the world wants her to sign on as his nurse. Indie agrees and her life starts to turn around. She’s got more time and money than she knows what to do with. Except she’s seeing things she shouldn’t and is worried she’s going crazy. Also, her dead patients and her senile aunt keep giving her cryptic clues to be watchful and wary. I won’t go into anything further because I hate spoilers in my reviews, but I will tell you what I liked, because there was a lot.

So from the start, the good and evil people seemed pretty clear cut, although an assumption I made about a third character seems to be wrong. I have a hunch that it’s going to come true in the next book though, based on some short conversation and some foreshadowing the author did. (I won’t give away any names so I’m sorry if that was too vague for you). Anyway, both the evil and good seemed pretty obvious and a bit overdone, although the apple on the cover makes a lot more sense now that I’ve read the book.

One of the issues I had with the book was the insta-love Indie seemed to develop. Insta-love seems to be contagious, as other characters seem to develop it as well. Which is not my cup of tea. I want to see how relationships develop and progress, so that was a bit of a turn off. Also, when she’s around one of the characters, the way the insta-love is described is a bit juvenile and awkward, which set the tone for their relationship and I wasn’t a fan, even though I was rooting for this man in particular! And after everything that happens, who she ends up with made me want to throw my book.

There was a lot of biblical tie in which seemed pretty well researched and added another depth to the story that I truly enjoyed. But for all of the advice Indie seemed to get, (time and time again the book quotes “Be sober minded and watchful. Your adversary, the devil, prowls like a roaring lion, seeking someone to devour.” 1 Peter 5:8), she didn’t really do anything! She brushed everything off as a psychotic break, and the danger increases, doesn’t change anything, just pops another Klonopin and does something frivolous. As someone who reads and believes in the Bible, had I received those warnings after some of the things that had happened to Indie, I’d have been making some major life changes. Or at the very least, been more wary of new acquaintences and more on guard.

Also, she doesn’t seem to fight any of her own battles! That bothers me with any character, and even though this battle was more of a spiritual one and I’m not entirely sure it wasn’t a psychotic break as the ending was a bit confusing, Indie didn’t do anything. All the fighting was left to another character (horribly vague, I know, but spoilers!) I’ll probably end up re-reading the last third of the book, just to set everything to rights in my mind!

Now, the author is writing a second book in the series so I hope my questions and everything that was set up in the first book concludes in the second, as there were a lot of loose ends and unanswered questions left at the end. But, by ending it the way she did (resolving the main problem but somehow leaving me wanting more), I’m fairly certain I’ll be buying the second book, just to see if my hunches were correct. And I want to learn more about Six. Is he good? Is he bad? Will the author tell me more later? I hope so!

Overall, I would say the writing wasn’t fantastic and the plot was predictable, but some of the subplots definitely made up for other areas that were lacking.

If this book sounds interesting to you, you can pick it up from Amazon for only $4.99!